Take the train to Boulder!

The Northwest Corridor is a prominent transportation corridor that connects the Capitol of Colorado, Denver, and the university/technology hub of Boulder. Currently dominated by automobile traffic and infrequent and lengthy bus service, there have been calls to strengthen the connection between the two cities.

Both cities are at the heart of Colorado's Front Range of the Rocky Mountains, marking the eastern edge of the mountains and the gateway to the west. It is at the front range where Interstate 25 runs connecting cities from Cheyenne, Wyoming all of the way down to Santa Fe and Albuquerque, New Mexico and connects a string of urban and suburban areas and while rail networks have a strong history in the state, it is almost exclusively used by freight carriers.

Amtrak provides daily service from Chicago to California via two routes. The Southwest Chief which only serves small stations in the southeast corner of the state before heading for Albuquerque and on to Los Angeles, and the second, the California Zephyr which has a major stop in Denver before heading on to Central California. After this project was completed, Amtrak added additional service dubbed the Ski Train to Winter Park, Colorado which follows the same route into the rockies that the California Zephyr runs up to the base of the Winter Park Resort at the end of the Moffat Tunnel past the Continental Divide.

The Ski Train is emblematic of Coloradans' desire for more frequent rail service where traffic corridors are becoming increasingly congested with automobiles. The distances between cities is enough that bus service takes too long compared to the convenience of a car, for example a drive from Denver to Boulder can take upwards of an hour in typical conditions. The road inventory of the metropolitan region shows sufficient highway and arterial thoroughfares however the Boulder Greenbelt has limited the number of roads as well as general development allowing for the city to expand.

Public transit service between the cities is provided by the Regional Transportation District (RTD) and extends to towns as far north as Longmont and as far south as Colorado Springs and it has been expanding a significant network of light rail lines including a commuter rail line to Denver International Airport. This proposal looks at the model of the commuter rail along the Airport Corridor and proposes a similar route from Denver that would run along US Highway 36 (the Boulder Turnpike) before splitting off to the north along BNSF lines into downtown Boulder.

Denver together with Boulder serves as the most populous metropolitan area in the greater rocky mountain region and supports a commuter workforce that overwhelmingly sees a Denver workforce living in Boulder as well as folks in the capitol accessing Boulder. A rail line supports the commuter workforces as a foundation of potential fares during the day while increase access of Denver's sports and cultural amenities for Boulder and Longmont's combined population of ~200,000.

The route proposed (from Boulder in the northwest) to Downtown Denver would serve a number of commercial hubs along the way including the cities of Louisville, Superior, Broomfield, and Westminster before terminating at Union Station. This provides connecting service to RTD's regional bus and light rail service as well as the commuter rail to the airport and Amtrak's daily California Zephyr service. 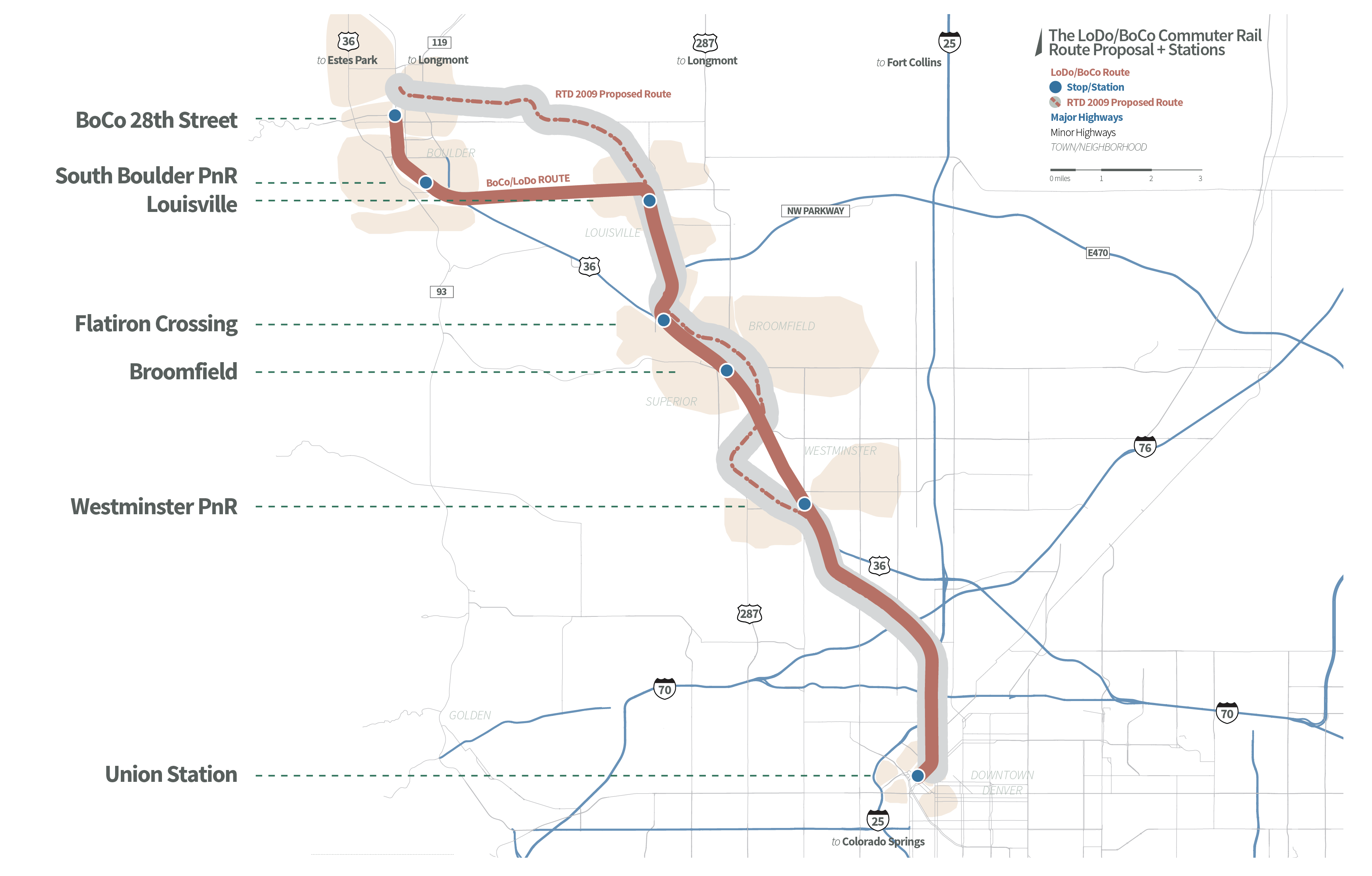 A proposal by RTD in 2009 evaluated a light rail service to Boulder but transitioned the plan to a bus rapid transit service that would take the center lanes of US 36. The dedicated lanes would terminate when where US 36 enters North Denver. This proposal serves as an option that would provide quicker service between Boulder and Denver's downtown neighborhoods while increasing the number of potential stops of the Bus Rapid Transit service provided today.

The following illustrations highlight the path from Boulder as well as the economic districts and residential neighborhoods that would be served.

This was completed as an urban design media project at Iowa State University with Mark Sterns and Narek Zakaryan.